This article draws upon a six-month legal review process involving finance professionals and experts in US law enforcement.

Illegal deforestation — should investors view it as a faraway, chronic, and exceedingly complex problem that defies meaningful legal intervention? Or are there real legal enforcement risks and solutions to this problem that should matter to investors?

Consider for a moment the legendary American gangster Al Capone, who was not imprisoned on the grounds of his violent and deadly leadership of Prohibition-era criminal rackets. He instead went to jail for the more generic financial offense of tax evasion.

In 1931, his accountant flipped and testified against him, providing the damning explanation of a coded accounts ledger that helped convict Capone and ultimately sent him to Alcatraz.

US prosecutors still apply the “Al Capone Strategy” when they charge defendants who may be guilty of far more serious core offenses with financial crimes that are simpler to prove. By scoring easier if perhaps less severe convictions, prosecutors can bring these offenders to some measure of justice while disrupting their criminal enterprises and getting them off the street.

The Al Capone Strategy is an example of a type of legal strategy that can litigate offenses to create societal change.

The Intersection between Financial and Forest Crime

Which brings us to the intersection between forest crime and financial crime.

Forest crime is big business. Interpol — the International Criminal Police Organization — estimates that illegal logging and related forest and financial crimes siphon off between $51 and $152 billion dollars from the global economy each year and are linked to other forms of crime. For many years, groundbreaking financial journalists and investigative NGOs have exposed how financial and even violent offenses — from corruption and fraud, to land confiscation and human rights abuses — accompany and accelerate forest crimes.

Agriculture is the principal driver of deforestation across the world, accounting for 80% of the total. The global agricultural sector is also worth trillions of dollars. And that means that institutional investors with holdings in agricultural supply chains may face legal and financial risks. When someone illegally clears a forest to produce and profit from agriculture goods, and some of the revenue generated accrues to a publicly-traded US corporation, that company may have exposure to legal liability depending on, among other things, its degree of knowledge.

Institutions that facilitate US securities and US dollar transactions involving these products may face litigation under both generally applicable and environmental statutes, including US anti-money laundering (AML) laws, the Foreign Corrupt Practices Act (FCPA), and other generally applicable statutes, and environmental statutes like the Lacey Act.

Court cases bear this out.

In 2013, Lumber Liquidators was caught with illegal deforestation in its supply chain and prosecuted in the United States under the Lacey Act, which was amended in 2008 to prohibit the importation of illegally harvested or protected tree wood. The company pled guilty and incurred a $13-million fine. Partially as a result of this, its share price fell.

But looking backwards, just Lumber Liquidators and a few other companies have been prosecuted in connection with illegal deforestation under the Lacey Act and perhaps false customs declaration charges.

There are possibly both anti-bribery and accounting provisions in the FCPA that can apply to forest crime. The US government enforces these laws through the US Department of Justice, which could in fact bring criminal charges, and the US Securities and Exchange Commission (SEC), which could bring civil or administrative actions.

The FCPA’s anti-bribery statute prohibits knowingly authorizing, offering, or paying “anything of value,” whether directly or indirectly, to foreign officials in order to influence them in their official capacities or to secure improper advantage to obtain or retain business. This requirement applies to issuers of securities traded publicly on US exchanges, including most American depositary receipts (ADRs), or on over-the-counter (OTC) markets.

The statute also pertains to institutions that are required to file reports with the SEC, their related corporate individuals and agents, as well as all US natural persons — both citizens and residents — and businesses formed or headquartered in the United States. Finally, anyone committing a foreign bribery offense while within the territory of the United States is subject to the law as well.

The FCPA’s less well-known accounting provisions require corporations issuing securities that trade on US exchanges to keep accurate books, records, and accounts of transactions, and to devise, implement, and maintain an adequate system of internal controls and financial recordkeeping.

In other words, if an issuer corporation has false accounting statements and records, fails to implement internal controls, or acts to bypass these requirements to hide forest crimes, the issuer and related-parties might be held liable under FCPA provisions. This provision includes non-listed subsidiaries’ accounting entries that gross up to the holding company’s accounts. This can incur a liability for the corporate parent.

Yet, this type of accounting malfeasance might encourage more straightforward charges of securities and bank fraud.

Legally, no materiality is needed when it comes to a books and records violation and there is no minimum monetary threshold for enforcement. So, an agribusiness with a very large balance sheet that falsified small transactions, which are uncovered in the course of a forest crime-related criminal investigation, could be in legal jeopardy. If the same corporation overstated the value of its agriculture assets in its annual report or other financial statement — say, to pledge the same assets as collateral to a bank for a loan for working capital to clear its land — it might also be violating the FCPA, among other offenses.

US anti-money laundering laws are designed to deprive criminals of the use and benefits of the US financial system. Given the US dollar’s role as a global currency, these laws have global reach. That means not only are the perpetrators of certain underlying crimes subject to money laundering liability, but so too can be those who help facilitate the financial transactions, including bankers, accountants, and lawyers.

This means that forest crimes can occur when someone conducts a US financial transaction or transfer of monetary instruments or funds with the knowledge that the transaction involves proceeds of some crime that turns out to be a SUA. In fact, one need not have committed or had any involvement in the underlying offense so long as afterwards one knowingly helped to transact the SUA’s proceeds to conceal or disguise the source, origin, nature, ownership, or control of the proceeds, to promote the SUA, or to attempt to avoid a reporting requirement.

The US government considers the profits earned by businesses through contracts or even regulatory license approvals obtained through bribery to be SUA proceeds. So timber, soybean, cacao, and palm oil companies that paid people off in exchange for concessions, relief from regulatory enforcement, etc., and then conducted US financial system transactions with the resulting revenue may be laundering money.

For example, if a palm oil magnate develops a land bank through corrupt means, plants crops with 30-year yields, uses the US financial system to sell the company as valued based upon these assets, and reaps the profits, all parties to the corporate acquisition who know of these events may be liable.

US wire and mail fraud laws could also pose a legal risk to corporations involved in forest crime. The applicable statutes generally prohibit schemes that use US telecommunications or mails — including email — to obtain “money or property” through fraudulent pretenses, representations, or promises.

For example, it could be wire fraud if an agriculture commodity producer or trader uses the wires or mails in a “transfer pricing” scheme to under-declare the value of the agriculture products it sells to an affiliate or colluding trade partner to evade export duties.

Under the Dodd-Frank Act of 2010 and rules the SEC issued in 2011, whistleblowers can receive bounties ranging between 10% and 30% of the fines the government collects from US-listed companies, as rewards for reporting original information leading to enforcement against violations of securities law, including the FCPA.

So in addition to ethical incentives, whistleblowers now have a financial motive to report forest crime.

The last potential legal risk is the Global Magnitsky Act. Passed in 2016, the Global Magnitsky Act is a sanctions law under which executive branch action can prohibit financial transactions with, and deny US entry to, listed foreign officials found responsible for corruption or human rights abuse. The law also targets those individuals and entities that support and finance such foreign officials. The current US administration has empowered US Treasury and State department officers to enforce this law. Sanctions were levied in 2018 against Dan Gertler and the people and businesses allegedly associated with him in the blood diamond trade in West Africa.

Only You Can Prevent Forest Crime

Interpol announced in June 2017 that it would lead a global effort to treat forest crime like other white collar crime. Tim Morris, Interpol’s executive director of police services, drew a parallel between networks that engage in forest crime and more notorious criminal enterprises. “Criminal intelligence held by Interpol confirms that the same routes and modus operandi used for the illegal trade of timber are also used for the illegal movement of commodities such as drugs and protected wildlife,” he said.

The Government Pension Fund of Norway, which has over $1 trillion in assets under management, published their anti-corruption guidelines in February 2018. Yngve Slyngstad, CEO of Norges Bank Investment Management, said, “We expect all companies we are invested in to have effective anti-corruption measures in place.”

So, is there an anti-corruption policy where you work? What is your organization doing to make sure its supply chain is forest-crime free? What about the companies you invest in? 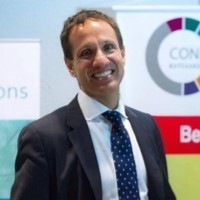 Gabriel Thoumi, CFA, FRM, is director of capital markets at Climate Advisers and has over 13 years experience as an ESG research manager showing investment teams that ESG issues — including climate risk — can be an indicator of corporate financial performance. During this time, his coverage universe has included both global equity and debt positions in the financials, consumer staples, energy, utilities, raw materials, constructions, agriculture, and chemicals sectors. In 2015, his proposal — developed with the Inter-American Development Bank — won the Global Innovation Lab for Climate Finance. He publishes a weekly finance blog on Bloomberg and elsewhere, and is a frequent global speaker on capital markets issues. 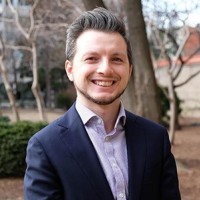 Anthony Mansell is director of policy and research at Climate Advisers, where he focuses on international climate policy, the role of carbon markets, and aviation. He previously was at the Center for Climate and Energy Solutions (C2ES), a leading environmental think tank. At C2ES, he specialized in international carbon markets and climate finance. He also supported climate negotiators during Paris Agreement talkss. From 2011 to 2014, Mansell was deputy director of the International Emissions Trading Association, representing over 150 companies to promote the use of carbon markets to reduce emissions cost efficiently. At IETA, he worked on California’s cap-and-trade program, forestry and land-use, and aviation, and edited IETA’s Greenhouse Gas Market Report.

Portugal and the New Economy in Europe